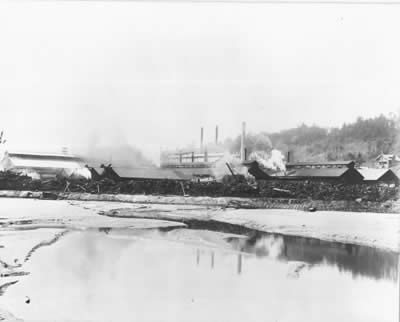 The land development that crowded out the Duwamish rippled through the tideflats and cove at the northeastern end of the Duwamish Peninsula. In the late 1800’s, John Longfellow had farmed this cove and logged the hills and valley for a cash crop. The trout creek the Duwamish called to-AH-wee was renamed Longfellow Creek. Land developers started the small settlement of Humphry where trees had been cut.

Humphry grew up to a mill town when William Pigott bought land for the Northern Pacific Railroad and 55 acres for himself on the tidelands. The site, near the waterfront and the proposed rail line from downtown to West Seattle, would be an ideal spot for manufacturing and transporting iron and steel. Pigott had opened iron mills in New York and Colorado; Judge E.M. Wilson owned and ran a mill in Lakeview, Tacoma. Joining forces in 1903, they formed the Seattle Steel Company and began construction the next year on Pigott’s land. Seattle movers and shakers hyped the beginning of a new industrial epoch; a special train carried 500 of Seattle’s leading citizens out to the mill for an opening reception on May 5, 1905. Humphry faded into Youngstown, named for the steel town in Ohio.

Youngstown occupied the tideflats and low valley between two ridges, what is now Pigeon Hill to the east and the slope toward Duwamish Head on the west. Wilson, the company president, and Pigott, the vice president, built large homes on the hill to the west. Workers came to work and to live in homes or rooming houses in the lowlands, just a short walk across pilings to the mill.

The company offered jobs to 140 employees, including 70 skilled ironworkers. Some of the workers, like John Heinzinger, the company’s top roller, moved with the mill from Lakeview. Others heard about jobs from friends. Erma Schwartz’s father Bill came from Portland in 1912, found a job and a house to rent and sent for his wife and four-year-old daughter.

Word of employment spread much farther than Portland. Gino Lucchesini’s father, Guido, heard from friends that Italians had settled in Youngstown and that work was available on the railroads and then in the steel mill. He came in 1912 from the town of Ponti Buggona and returned to Italy to bring back his wife, Atilia, in 1913. Archie Smith, an African-American, had worked in a steel foundry in St. Louis before moving to Seattle in 1922. After six months of looking for work, he was hired on at the mill, too.

Erma Schwartz and her mother arrived on a streetcar which crossed the Duwamish River on a trestle. “There’s water,” Erma said. “I sat there with my eyes on that water; I couldn’t understand why we were on the water.” When the streetcar reached Pigeon Point, it turned and came south, and they got off and walked up to their house on 26th Avenue. (Courtesy Southwest Seattle Historical Society/Log House Museum)

The tide-flats of Elliott Bay ended at Andover Street where there was a collection of stores: Mitchell Sauriol’s grocery and post office; Loui Baldi’s meat market; and, farther west, two rooming houses for workers at the mill. Baldi owned a grocery store in Pioneer Square, and he would take bulk orders for groceries every Wednesday. On Dakota and 28th, Simon and Anthony Skalabrin opened a general store. About once a year, Gypsies came around to re-tin copper pots and do welding from a wagon. Click for audio(Thornquist) “[T]he fact that it was a complete town made it great for all of us,” Schwartz recalled. Click for audio (McLean)

As Youngstown grew, so did the community of Riverside, on the Duwamish River on the east side of Pigeon Hill. The river was dredged and straightened from 1909 to 1917, to control flooding and create an industrial waterway. Soon riverside industries offered jobs, and the demand for housing increased. Local grocery stores supplied residents and the fishing fleet; single-room occupancy hotels lodged laborers, and worker’s families could rent portable housing.